It was Friday. And we weren’t quite sure where we were going next, but we were happy to be ging somewhere. Over breakfast we figured out we wanted to make our way to Pichilemu, a surf town south of Valparaiso. We scouted a camping option there and it seemed like a good place for our first night sleeping in the van. So, after one last shower and gathering a few supplies, we made our way south.

We’ve already learned a few things about driving here. One: the maps we brought with us don’t do much, and the signage on the road doesn’t help much either. So our new navigation method is to route a course on the iPad when we have wifi and then pray that we don’t need to change our plans :) Second: unless we’re on the Panamerican highway which runs north to south through the center of the country, we probably won’t be going anywhere quickly.

Since we realized we wouldn’t be making good time anyway, we gave in and stopped at Vina Matetic, a winery on the outskirts of the Casablanca valley. We tasted a few wines sitting out on the patio while a group next to us shared a bottle over a game of cards. It was quite and sunny and a perfect first stop on our trip.

The rest of the day of driving was actually really lovely. A nice windy road, fully paved, and much of it through miles and miles of recently planted pine trees, brought us slowly back out to the coast and the town of Pichilemu, one of Chile’s surf meccas due to the nonstop sets of waves that roll around the point at the end of town.

Since this was our first night camping in the van we had done a bit of scouting ahead to find a site just so we would have one less thing to worry about. Our destination was Pequeno Bosque campground, which turned out be less of a bosque (forest) and more of a front yard… we’re still getting used to what it mans to camp here. I’m used to camping in State Parks or National Parks but here we’re learning that camping has more of a home-cooked flavor :)

Our host, Lucy, couldn’t have been nicer, and did her best to make simple jokes that we might enjoy with our limited Spanish while she explained how everything worked. She and her husband were hard at work hanging all their Christmas decorations and we were happy to park and work on our own project – unpacking and repacking the van. 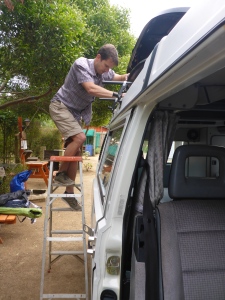 In order to fit it in the container for shipping, we had to remove our rooftop storage bin, empty all the contents, and throw everything inside the vehicle. Now we had to figure out how to put the puzzle back together again, with the addition of the two bags we had packed to get us through the few weeks without the van.

We managed to get everything back on the roof and then set out to explore the town.

Both the guidebook and our host had recommended La Casa de las Empanadas, so we walked to the center of town and checked it out. They were both right. For about $3 we got two big empanadas, choosing from about 25 flavor options. Each was about the size of my head. We brought our feast down to the beach and spent dinnertime watching the waves roll in. 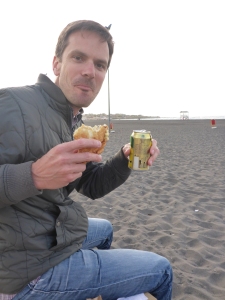 The highlight of our grocery store run was the jugs of wine lining the aisles. Tempting, but we resisted. 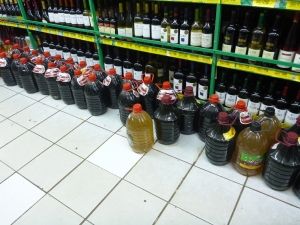 By the time we made it home we were pretty much down for the count. All the anticipation leading up to the day, plus a pretty full day of driving, had taken it out of us. We stayed awake just barely long enough to figure out a rough outline for the following day.

There was an error retrieving images from Instagram. An attempt will be remade in a few minutes.