Our overnight ferry pulled into the dock around 8:30am. 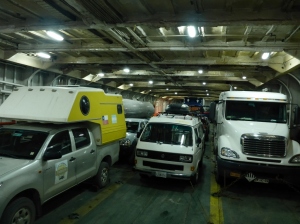 While waiting to get back in our cars we chatted with a nice Argentinian who had been checking out our license plates at the gas station the night before and wanted to know how a California car had found its way to Patagonia.

Pretty soon we were off the ferry. We had arrived at the Carretera Austral, which we expected to be a highlight of the trip. The Carretera Austral is about 1200 km, mostly unpaved, connecting Patagonian Chile with the rest of country. 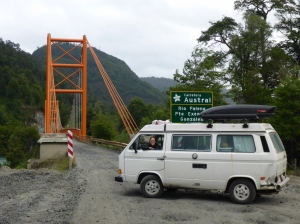 Although there was plenty of gravel road to go around, we were pleasantly surprised to find that at least some of the road had been recently paved. We drove south through beautiful country. The Carretera meandered through a valley full of minty-green rivers, surrounded by snow-capped peaks. The brave ranchers who made it work out here had certainly chosen a decent view. We saw cars and cyclists occasionally, but for the most part, we felt like we had the place to ourselves. We stopped to make breakfast along the river and spent a few minutes taking it all in.

We had targeted the town of Puyuhuapi as our goal for the day, hoping to camp in the nearby national park. Stopping for gas in La Junta, a German couple saw our foreign plates and pulled up next to us. They were headed in our direction but had just been turned away a few kilometers down the road by a construction crew that had told them the road ahead was closed because of a landslide just north of Puyuhaupi. They told us the road would open back up again around 2 in the afternoon and we ran into another traveler who told us a similar story. We decided to stay in La Junta for lunch, hopefully catch some Wifi, and then be on our way. 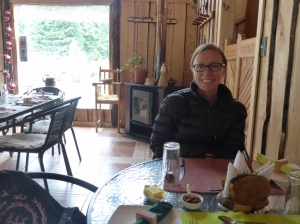 The local café was crowded and lunch was decent; we lingered as long as we could and then killed a little more time taking a detour out to a nearby lake. The road mostly sucked and I was annoyed the whole time that we were putting our car through unnecessary abuse, but it was a lovely view once we arrived. 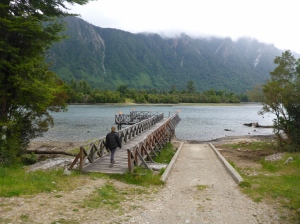 Finally we were back on the road south. Just a few kilometers down the road, the construction crew stopped us to tell us about the landslide. We showed them our map, and asked about the campsite we wanted to go to; the lady we talked to wasn’t exactly sure whether it was north or south of the landslide and told us we were welcome to keep going knowing we may not be able to get through. So we  continued, past another checkpoint where we had the same discussion. Even with the delays, the road was amazingly beautiful, and I understood the attraction of this area. 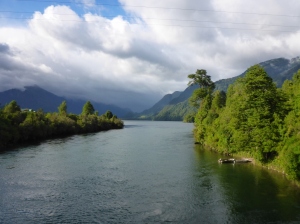 Eventually we made it just a few kilometers north of our campground where we came to a final checkpoint. The guard there wouldn’t let us through, and told us the road would likely be closed for at least another day, likely at least two more days, perhaps more. Maybe more? Ugh. We pleaded with him, hoping that we could make it just a little bit further… eventually we gave up and turned around, driving back to La Junta where  we stopped at the tourist information office to find out if they had nay better information. The guy wasn’t much help. He told us the same thing – road closed, closed for a couple days at least, but no idea when it would open. We asked about the port to the west, which on the map looked like it had a ferry connection to ports south of the landslide. He told us the next boat wasn’t until Monday (it was only Thursday) and it was already full so if we wanted to book we would have to wait until December 28th. That obviously wasn’t going to work for us. We asked if he had any other options or ideas for us, and he suggested kayaking. Not really what we had in mind. With that, he pointed us towards the only camping option in town and we resigned ourselves to staying the night in La Junta.

We were obviously disappointed not to make the forward progress we had hoped for, but certainly made the best of it. We camped in someone’s front yard again at Vientos del Sur. 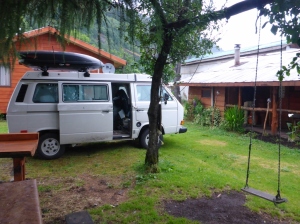 Our host was incredibly sweet and we feel in love with the little kitten running around the property. By this time it was windy and raining and the clean bathrooms and hot showers helped us relax. Wolf took advantage of the rain and gave our windows a wash while I made dinner.