Before setting off, we tried to repair our busted hydraulic strut, but somehow in the wind, either the strut or our roof had shifted enough that we couldn’t quite return things to their previous state.  We gave up and moved on towards Rio Gallegos, the next major town. Upon arriving, we were disappointed to find that while the town actually did have a Volkswagen dealership and service center, it appeared to be closed, presumably for the holidays. We stopped for gas and a few basic supplies before heading south again. We’d done a pretty good job eating through all our fruits and veggies in anticipation of our border crossing back into Chile where we knew they would confiscate anything. Just before crossing we made one last set of sandwiches for lunch, finishing off everything we could.

We thought we knew what we were doing when we got in line on the Argentinian side of the border, until a couple of Dutch travelers pointed us in the right direction, telling us that we only needed to proceed to the Chilean side, where they would stamp us out of Argentina and into Chile. With their help we made it to the right place, and received our vehicle permit for our stay in Chile. This time, we would only be passing through, cutting across Chile in order to make our way to Argentinian Tierra del Fuego.

From there, we drove a bit further until reaching Punta Delgada where we would take a ferry to cross the Strait of Magellan, which felt like quite a milestone.

We lined up and waited for the ferry, alongside locals, tourists, truckers, and watched the ferry dock but continue to sway dramatically in the tide, back and forth while we drove onto the deck. 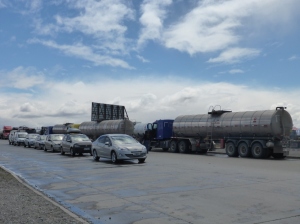 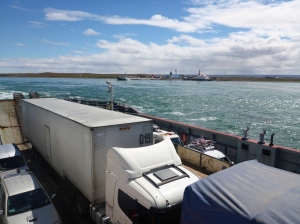 We found a spot up top and were shocked when we saw penguins swimming in the water, as well as several cool black and white Commerson’s dolphins jumping and swimming alongside the boat! They looked like tiny little orca whales riding along with us.

In Tierra del Fuego we arrived at the ferry port and a few miles down the road we had to choose our route south. The Swiss couple in the Volkswagen from our campground in El Calafate suggested that we take the route all the truckers were taking – it looked like dirt on the map but they told us they were in the process of paving which gave us hope. So we turned down the road not marked on our map which felt like a poetic choice to start our journey towards the end of the world.

The scenery had the same look as much of the Argentinian pampas we had passed through on our way south, but in the distance we could see peaks of the mountain ranges at the southern end of the island.

The road wasn’t great, but there were a few glorious moments of pavement that made it all worthwhile. After just a few hours in Chile, we arrived at the border crossing back into Argentina at San Sebastien, which is apparently where all the hip and happening immigration officials hang out. They were jamming to classic rock at impressive volumes and all the officials seemed to be happy and having a good time. 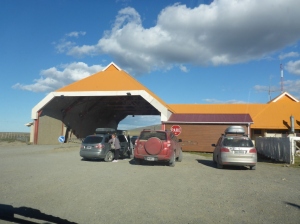 At this point in the day it was getting late, we were hungry and tired and needed to give the car a rest. The overlander map we had been using had led us to believe that there would be a campground just after the border. All we found was a somewhat functioning gas station and not much else. So we pushed on, once again making the day much longer than intended, until we reached Rio Grande. We asked around for a while to try to find a campground, eventually gave up and checked into the first hotel we could find. Pizza at the most happening spot in town was almost more excitement than we could handle before calling it a night.

After breakfast at the hotel the next morning we hit the road again, determined the make it to Ushuaia, our southernmost destination, by the end of the day. The drive south was beautiful and varied – hills, mountain peaks, lakes, forests… and so different from the northern part of the island. We stopped at Lake Fagnano for lunch, which we learned is a unique place because it is one of the few places on earth where you can see physical evidence of the convergence of tectonic plates. 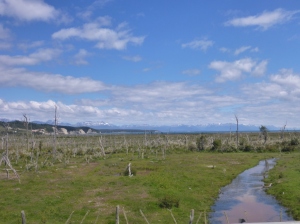 We drove up and down mountain passes, past ski runs and chair lifts that had shut for the season, loving the change in scenery.

We finally arrived in Ushuaia, the southernmost city in the world (apparently there are “settlements” that are more southerly, but no major cities, or something like that).

Here again we had heard about a campground in town, and saw signs for the site on our way into town, but hadn’t been able to find it ourselves. The tourist information office made it sound like the campground we were looking for did exist, but wasn’t city-sanctioned, so they wouldn’t tell us how to get there. We spent a few minutes poking around near the harbor in the hopes of booking some kind of tour for the following day and then set out towards Parque Nacional Tierra del Fuego to find a place to stay for the night. When we pulled in we were excited to find that our pass entitled us to three days and two nights in the park, and we made our way to the Rio Pipo campsite inside the park. It was awesome to pull in and see tons and tons of people hanging out, picnicking, hiking and enjoying the day. I imagine that arriving a few days after Christmas meant that we caught a good number of Chileans and Argentinians still enjoying their Christmas holidays.

The campground was packed but we found a lovely site right next to the river and nestled in a grove of trees. 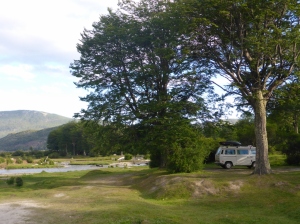 We parked and set out for a short hike out to a little waterfall. Our timing couldn’t have been better with the sun finally breaking through the clouds for our little walk. 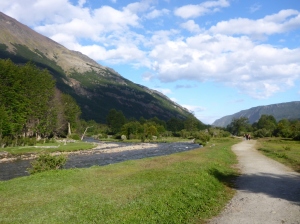 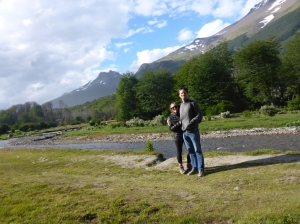 We stopped and took photos and enjoyed the waterfall before returning back to the van to cook and watch some fierce-looking birds trotting around our site looking for food. 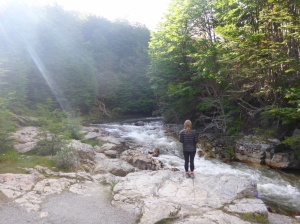 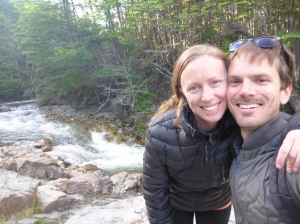 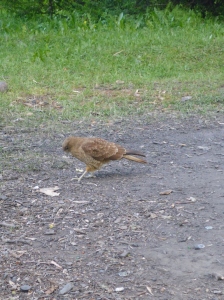 We wandered around the river after dinner, and finally crashed – even though it was late at night, it still looked like mid-day outside as we shut the curtains. 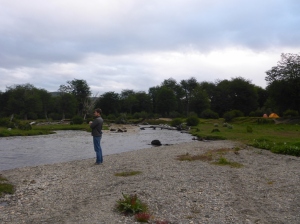