Our last morning in Cusco we spent packing up and chatting with the other overlanders, including another couple in a Volkswagen – we found out he’d spent the last two years customizing and restoring their van in anticipation of this trip. We admitted to him that we’d only bought our van a couple of months before leaving and we had a lot of fun comparing notes and checking out each others’ vehicles.

Before too long we were in the van, dropping Ciaran and Anas off at their hostel. They would stay in Cusco a few more days and we were saying goodbye, likely until we saw them next in Germany. We were so sad to see them go – it had been all the more fun sharing our adventure with good friends.

The road out of Cusco wound through a series of valleys, often with heavy fog, and through lots of cute little towns. We stopped for lunch in one, and made sandwiches at the main plaza, gathering a few confused looks from locals as they checked out license plates.

Further down the road our windy road dropped down into a canyon, which turned out to be amazingly beautiful – the sheer, rocky walls were lined with what looked like agave and various succulents, poking out of every crevice. It almost looked like a movie set, and we followed the river through the canyon for most of the afternoon, listening to podcasts and enjoying a gorgeous day of driving. 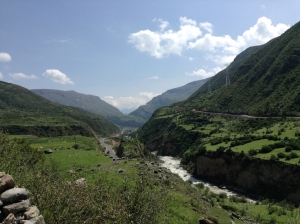 Just as it started getting dark we arrived at an isolated little hacienda, all alone in the middle of the canyon. We’d read that camping might be possible and arriving later than we hoped, we crossed our fingers as we rang the bell outside the locked gate. We waited for a couple of minutes and when no one appeared, we started to wonder where else we could go. We hadn’t passed anything in a while, and the tiny toad at the bottom of a canyon didn’t exactly offer many turnoff options for roadside camping. After ringing the bell again and waiting a few more minutes, someone finally came around the corner. They welcomed us in and we set up camp just as the sun went down.

The complex itself was incredibly surprising – several buildings full of lovely looking hotel suites, plus a beautiful on-site chapel.

We were all alone except for a few peacocks , llamas and alpacas wandering the grounds.

I couldn’t quite figure out who actually came here, but the whole place was incredibly charming. With the restaurant all to ourselves, we felt like royalty at dinner. 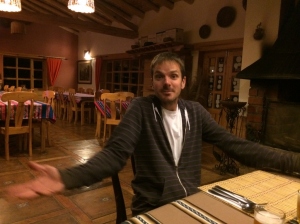 The same was true at breakfast the next morning, and afterwards we said goodbye to our animal friends and headed back down the road towards Nazca.

Eventually, the road climbed back up to nearly 5,000 meters and suddenly we were back in the clouds, with minimal visibility.

The clouds cleared long enough for us to see some lovely lakes and a few vicuñas grazing along the rolling hills. Otherwise, we slowly descended down towards the Peruvian coast.

The closer we came, the more desolate the landscape became; no longer lush river canyons, but instead, sandy, flat, post-apocalyptic scenery taking its place. By the time we arrived in Nazca, we felt like we’d entered a completely different country. Our first stop in Nazca was to check out the airport where we decided to book a scenic flight for the next day. Afterwards, we tried the campsite where we’d planned to spend the night, only to find that they were hosting an all night party; we promptly went in search of another option, eventually finding ou way to a hotel tucked away down a dirt road in the middle of farmland. We were so happy to be able to jump in their deserted pool  in the cool of the evening.

The next morning we arrived at the airport for our early morning flight. Wolf was super excited to jump in a little plane again and our flight took us up and over the nearby Nazca Lines. 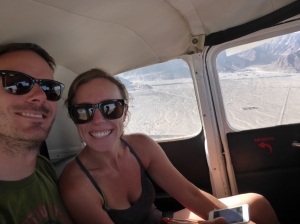 Our pilot circled us around each formation we passed, giving us a great view of so many of the famous formations – the astronaut, the hummingbird, the frog… 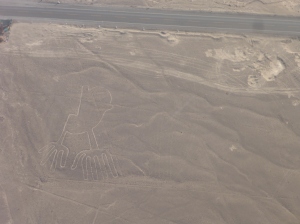 It was pretty amazing to realize the size of the drawings and the obvious precision with which they’d been created. It was also surprising that they weren’t more stark. You could certainly see the shapes, but I’d imagined stark white lines against dark backgrounds, and in reality, everything was just a bit more beige than I’d imagined :) 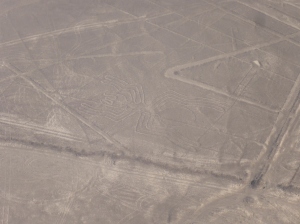 Back at the airport we had an annoying exchange with the airport personnel which basically resulted in us getting swindled out of a bunch of money. Unfortunately, the whole thing put a sour taste in our mouth and somewhat tainted the great experience checking out the lines.

From there we headed to the Chauchilla Cemetery and checked out the pre-hispanic mummies that have been preserved naturally by the dry climate. 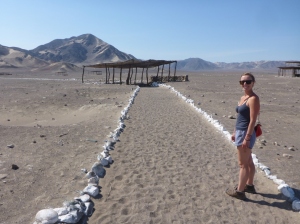 Immediately afterwards, we spent hours chasing down a propane refill, trying to get a car wash, and being pointed in the wrong direction for grocery shopping… essentially everyone we encountered in Nazca was pretty inhospitable. If we weren’t getting ripped off, then people were rude and unhelpful and basically disappointing. We couldn’t wait to get out of there.

Driving north from Nazca was more of the same desolate landscape, with huge sand dunes stretching as far as the eye could see. Not much changed all day as we drove through miles and miles of sandy landscape. It was so dramatically different from the lush, jungle we’d left behind in Cusco. 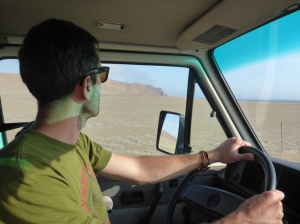 By late afternoon we were nearing Reserva Nacional Paracas where we planned to camp for the night. The park itself was a continuation of the sandy landscape, but with some interesting dune formations juxtaposed against the Pacific Ocean, it certainly had a unique appeal.

We joined a German and Danish couple also camping on the beach and set up shop for the night. A nice walk with a cool ocean breeze was much-needed after a long, hot, desolate day. A quiet night on the coast felt just about perfect. 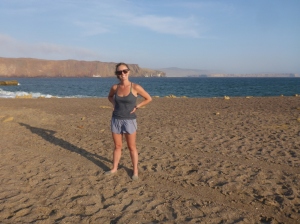 The following morning we would make our way towards Lima. We had heard about Lima’s German Club from a couple we’d met down in Patagonia, and decided to give it a try. Despite tons of traffic coming into the city we arrived in the early afternoon and pulled up to the German Club hoping everything we’d heard would be true. Behind a private gate, the security guards asked for our passports and then sent us up to the main office where the staff welcomed us and explained the facilities and where to park. The German Club turns out to be a country club, smack in the middle of Lima. Tennis courts, soccer field, several swimming pools… everything wealthy families in Lima might want. But, given the roots of the club’s founders, they also offer camping and use of the facilities free to anyone presenting a German passport. So just like that, we were in. 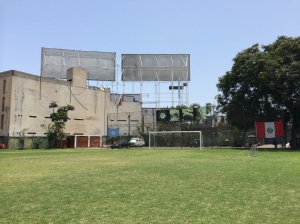 We certainly felt out of place when we brought our dinner leftovers to the lawn chairs, but the waiters still came by offering to bring us drinks and snacks. 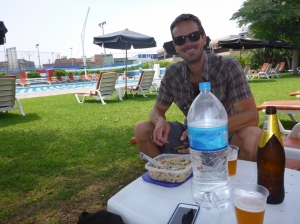 All of a sudden we felt like we were no longer living in our van, but rather staying at a posh resort. It was a lovely change. We sat by the pool and took full advantage of the wifi. I could have lounged there all day, jumping in the pool and back to the lawnchairs…

Eventually we faced reality and set about running a few errands, including dropping off laundry. By the time dinner rolled around we decided to head out in search of Peruvian ceviche and pisco sours, seemingly the appropriate meal to kick off our visit to the city. After a taxi ride into Miraflores, we realized our Monday evening meant the restaurant we’d chosen, along with many others, were actually closed. So after a bit of a stroll, we ended up at a random newly opened restaurant. Coincidentally, the chef and owner turned out to have spent the majority of his career working in the Bay Area and the Santa Ynez Ranch near Santa Barbara.

The following day, we still couldn’t quite tear ourselves away from the pool and enjoyed the German Club facilities for another long morning. By the afternoon we headed into the center of town, first grabbing lunch at a diner with all the locals, and then checking out the main square and nearby churches, including a tour of the San Francisco Monastery, including its pretty amazing library and catacombs. 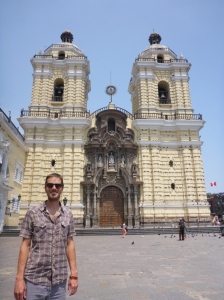 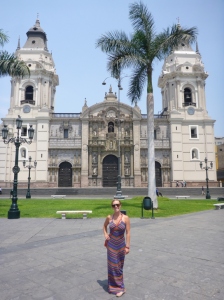 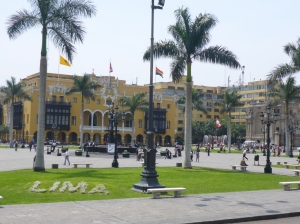 Later in the afternoon we made our way back to Miraflores to meet up with Miguel, a Westy owner living in Lima who we hoped might be able to help us fill our empty propane tanks. It was so fun to meet Miguel and chat with him about his van, recent trips, and also share with him what we’d been up to.

He turned out to be our savior, coming up with just the adaptor we needed.

Miguel was so nice that he not only accompanied us to the filling station, but also brought us to a mechanic who hooked us up with an oil change.

Afterwards we headed back to Miguel’s place for a beer and to chat with one of his other Westy-fan friends.

Heading back to the German Club that night we felt incredibly grateful for Miguel and his help. He’d made our day and we were ready to hit the road again.