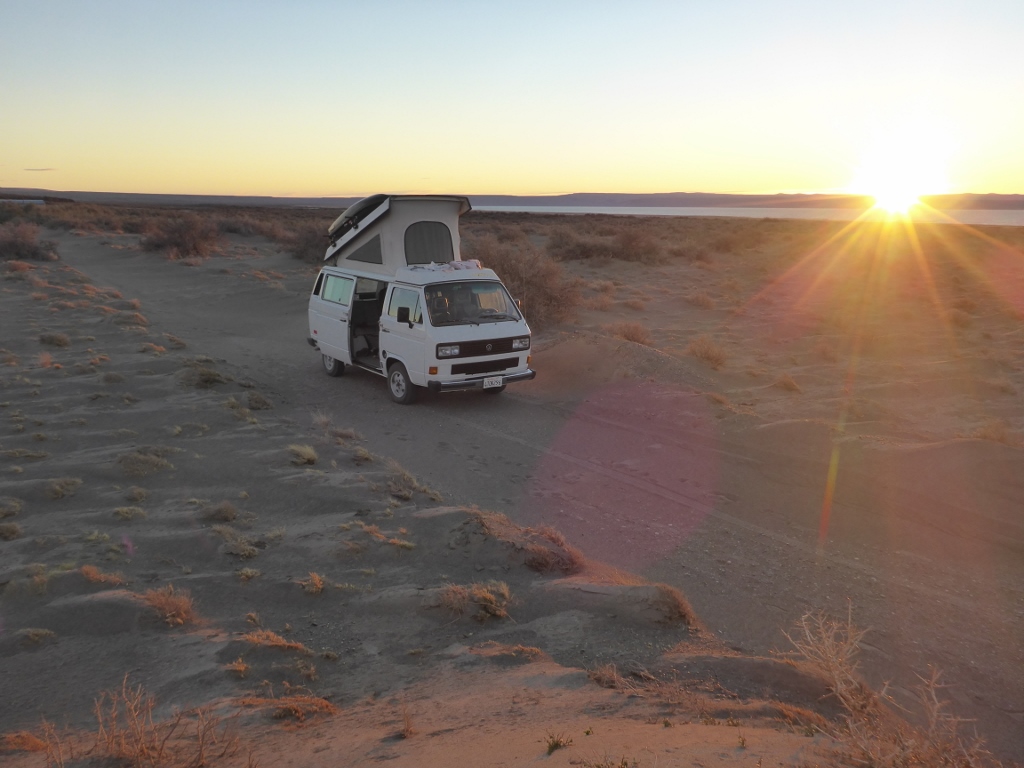 Sunday morning we made a plan. We decided that we should try to push on to a larger town with, hopefully, a mechanic who might be able to give us a little more guidance. The car was driveable, after all. So after breakfast we packed up and headed out. Wolf had puttered around in the engine that morning, trying to figure out a few DIY fixes, so we gave it a shot, heading out of town. We made it about a mile down the road before the issue came back. After a quick chat weighing our options we decided to turn around and see if Diego could help us out. One thing Wolf thought would help was replacing the oxygen sensor, which seemed to be a popular solution to our problem in the online community. With impressive foresight, Wolf had thought to bring a new oxygen sensor with us, but we didn’t have the right tools to do so. We first stopped back at the hotel and borrowed a wrench from the owner (we brought a decent amount of tools with us, but just not the one we needed for this job) to see if we could change the part out ourselves. Brute force wasn’t enough to make it budge, so we made our way back to Diego’s place. We knocked on the door and found him hanging out with a few buddies, enjoying a Sunday afternoon which we were about to ruin.

We explained that all we wanted him to do was change out the oxygen sensor and he lit up a cigarette and got to work. He opened up the doors to his garage, revealing a nicely equipped workshop, including the obligatory mate station in the corner.

Diego ducked under the car, pieced together a nice long handle for his crescent wrench, put some serious force into it and pop – off came our rusty oxygen sensor… along with a nice chunk of our catalytic converter. Hmm. Not how we had pictured this going.

Diego seemed unphased by the fact that now we had two broken parts and still hadn’t solved our issue. He took our new oxygen sensor and started piecing together random parts from around his shop. He planned to weld a new piece onto the catalytic converter which would allow us to attach the two back together. Seemed pretty genius to me. I expected that we had suddenly stranded ourselves in Río Mayo, waiting for new parts to be FedEx-ed to us, but apparently it takes a much bigger issue to stop Diego :) 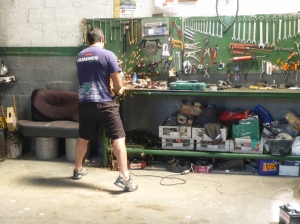 He pulled out his welder and welding mask and got busy, sparks flying everywhere. Meanwhile, his buddy checked out spark plugs, which still seemed to be working great. 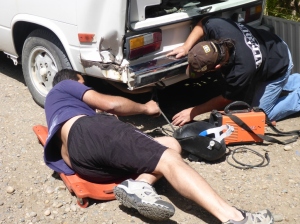 Finally Diego emerged from underneath the car, we tested her out, and we agreed the job was done. Diego joked about the bill with Wolf and finally, a few hours later than planned, we climbed back in the car and headed out.

Our next destination was El Chalten, just outside the Parque Nacional Los Glaciares, but that was many hundred kilometers away, more than a day’s drive. The map showed a few towns in between, although we weren’t sure whether those were actually towns, or just ranches, so we knew the day could turn into an adventure, between our issues with the car and finding a place to stay that night. 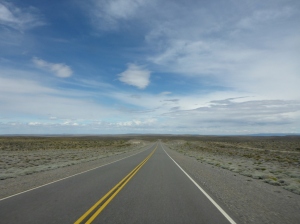 What we didn’t expect was the hundreds more kilometers of unpaved road ahead. Route 40 seems to be a famous highway here, sort of like Route 66 in the US. There are bumper stickers and T-Shirts with “Ruta 40” everywhere. But for the life of me, I can’t figure out why. It is largely unpaved, and seems to connect a few tiny and somewhat sad towns. I guess for overlanding enthusiasts, the attraction may be the remoteness of it all. And it certainly feels remote. The landscape is most flat, with occasional hills or plateaus, and  hardly any vegetation. One thing it does have though is some cool wildlife. We saw rabbits and a few foxes, but were super excited to see guanocos (like llamas with less hair): 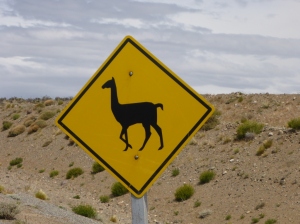 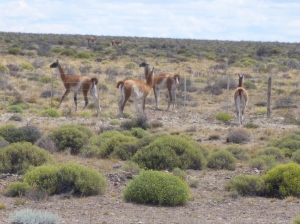 And rheas (cousins of the ostrich):

These guys were everywhere. I mean, we saw hundreds and hundreds of both during our drive, plus lots of cattle and sheep. We drove most of the day. By the time the sun started to go down we were squarely in the middle of nowhere, but nearby Lake Cardiel caught our eye on the map, and we steered off the main gravel road and onto a side gravel road to find ourselves a campsite with a lake view. 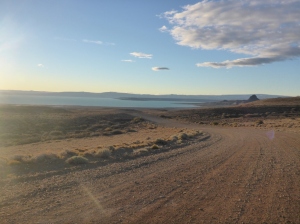 We had hardly seen anyone all day, even on the main road, and the scene at the lake was no exception, but we didn’t want to keep driving at night and we all needed a rest – Wolf, me, the car…. It was isolated and desolate, but it was also beautiful. We found a flat spot, parked the car, and popped the top for our first night of wild camping.

We were so relieved to have made it there, still rattled from all the unpaved roads, and slightly apprehensive about the following day. We needed a little pick me up so we made ourselves another Mexican fiesta. We had been soaking black beans for just such an occasion (they’re challenging to find in canned or other ready-to-eat form here so we’re now preparing most of our legumes the old-fashioned way), so we threw together some veggies, busted out the chips and salsa we had been hoarding, and turned on the Christmas lights. 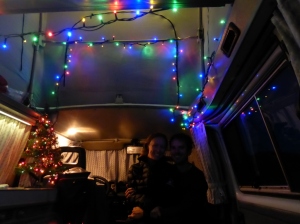 Wolf set his alarm for the middle of the night to check out the Southern skies from our remote location. We were far enough south that it wasn’t quite dark, but it was a nice reminder of times we’ve both enjoyed checking out the night sky with our families.

The day had been stressful and long. The car wasn’t performing the way we had hoped. The roads were so much worse than what we expected. The route we were taking was completely different than the route we had planned down the Carretera Austral… The combination of it all was stressful.

But the night spent at Lago Cardiel was much needed. It was beautiful and remote and we felt alone and connected all at the same time. Most importantly, it reminded us that we had come here to find adventure. And we had found it.

2 thoughts on “Escape from Río Mayo”