Waking up at the lake was incredibly peaceful. We were all alone, and in the morning light, the lake looked turquoise, a stark contrast to the sandy dunes all around us.

Back on Route 40, we slowly picked our way through the unpaved road, finally finding another paved section. The wind had picked up dramatically, strong enough that we were fighting against each gust and a bathroom stop on the side of the road nearly blew us away.

With our big storage container strapped to the top of the roof, we were pretty top-heavy and were careful to watch our speed and focus on the direction of the wind. Driving along the gravel roads with incredibly gusty winds meant that our car was a veritable sound machine: jiggling and jostling and whistling and whooshing… We heard it all. At one point though, I thought I heard a different sort of sound that I couldn’t place. I turned around expecting to see something had fallen open or toppled over, but it all looked normal to me. A second later Wolf looked back, I did a double take, and we realized that our pop-top roof had come unlatched and opened completely – suddenly we were sailing instead of driving.

Wolf immediately stopped the car and we jumped out to look. With gale-force winds in effect, just looking was a challenge. We tried pulling it down, then realized the wind was still working against us as it blew head-on into our new sail. We turned the car across the road and Wolf pulled it down while I ran around stuffing the tent inside, as is our normal process of closing the top, until I realized we had a new issue. One of the hydraulic struts Wolf installed had come loose and was dangling in the wind. The strut was super helpful in lifting the pop top given all the weight we were carrying around in our roof storage box.I ducke din to tell Wolf and we traded places, with me struggling to lift the hundred-plus pounds on the rood while he tried to remove the now-useless strut. While all this is happening the hurricane-like winds hadn’t relented; we struggled against the wind until Wolf managed to remove the strut and we turned the car back around and pulled over to settle ourselves for a minute. The whole situation had rattled me and I was scared that it would happen again – all I wanted to do was sit in the back and hold the top down.

The wind was unrelenting and we were still a long way from our destination but we didn’t have much choice. So we kept going, and as we rounded the next turn, we watched a massive dust storm tearing across the road ahead of us. It was all unbelievable. Since I didn’t know what else to do, I dangled from the roof in back, holding it down the best I could while Wolf inched his way through the dust storm, so thick that we couldn’t see more than a few feet in front of us. The rest of the day was slow going as we fought the nonstop wind and more gravel roads, afraid that our roof would again fly off. As we thought back to packing up that morning, we realized that we hadn’t heard the normal locking sound and realized that the lock must not have been completely in place. We couldn’t believe we had been so careless.

Eventually, we neared El Chalten, and despite more wind, perhaps even more aggressive than before, the road into town provided stunning views of the glacial Lago Viedma, the Viedma Glacier, and Mt. Fitz Roy with its jagged peaks. 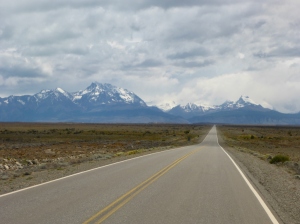 We stopped to get a map of the national park, hoping to do some serious hiking the next day, and then to the tourist information office to see about accommodation. With the howling wind, we had decided that staying in the van would only result in a sleepless night, so we found a nice cozy spot that even allowed us to pay in USD since the only ATM in town was out of order and we had arrived with hardly any Argentinian pesos.

Hot showers were in store, followed by a walk about town to find dinner and a few local beers. Again, we resolved to do more research on our car issues in the hopes of addressing something the next morning.