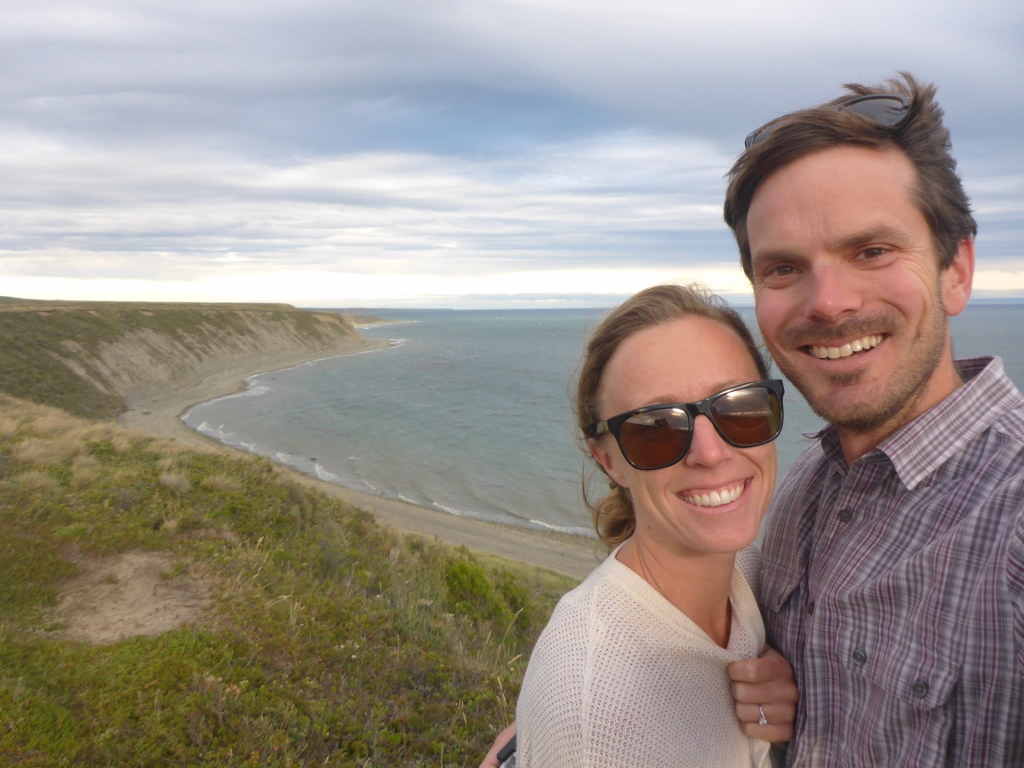 January 1st it felt good to officially start heading north, towards home, towards our families and friends, towards all the excitement of 2015. We headed out of Ushuaia early and started on the same route we had travelled south just a few days earlier. This time though, we planned to take a ferry from the town of Porvenir, on the Chilean side of Tierra del Fuego, which would take us to Punta Arenas. We had tried to make a reservation for the ferry, but we weren’t exactly sure whether our emails were received, and we also weren’t exactly clear on when we needed to arrive, and how long it might take, so we planned to spend our first day driving as far as possible. We were thankful we hadn’t depended on getting gas at the border in San Sebastien when we pulled up and were told the power was out so the attendant couldn’t pump anything for us. 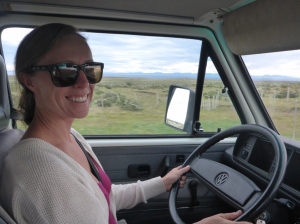 The stretch of road towards Porvenir was new to us and we were amazed by the beauty. Our guidebook did mention that the drive might be a highlight, but we hadn’t planned to go out of our way to enjoy another dirt road. In this case, though, the road, while unpaved, was surprisingly decent. And we seemed to be the only people taking advantage of it. 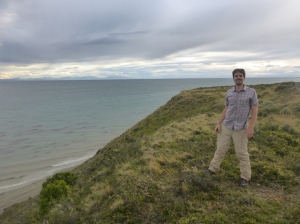 Our route curved out to the coast of the Bahia Inutil, with sweeping views at every turn. 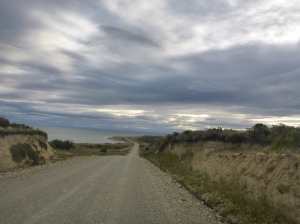 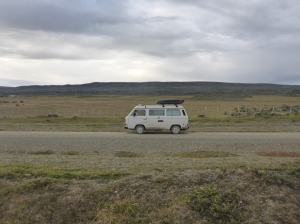 We drove most of the day, again lucky enough to get beautiful lighting for our trip through more beautiful scenery, dotted with gorgeous beaches and picturesque, if a bit shabby, fishing huts. 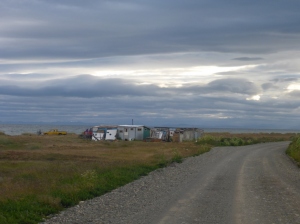 As it started to get dark, we realized we wouldn’t make it to Porvenir that night and started looking for a place to camp along the road. We were lucky enough to stumble upon a perfect spot, on a tiny turnoff, inches from the sand, where the road suddenly turned and climbed up, giving us a perfectly secluded seaside campsite. 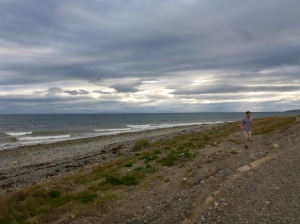 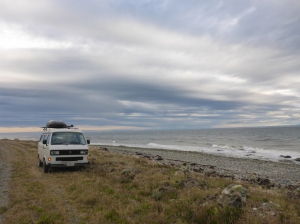 We felt so lucky to have found somewhere beautiful and secluded to spend the first night of the new year. Since we hadn’t planned  a dinner we put together a feast of odds and ends, toasted with the champagne we had fallen asleep too early to enjoy the night before, and watched the sunset over the water.

The next morning we woke up to more howling wind, a perfect encouragement to pack up and head out. 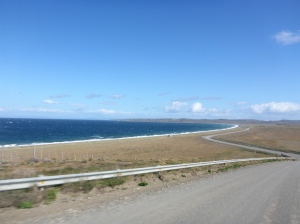 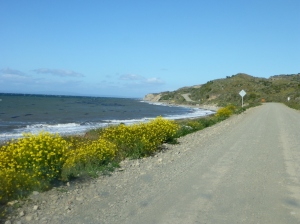 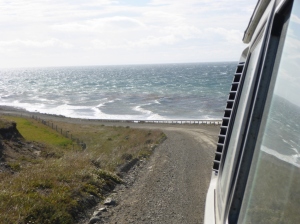 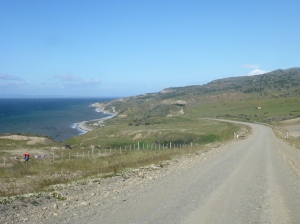 Arriving in Porvenir we were welcomed by the local police who just wanted to check our papers and then were nice enough to give us directions to the  ferry building, giving us strange looks for wanting to arrive 4 hours early. 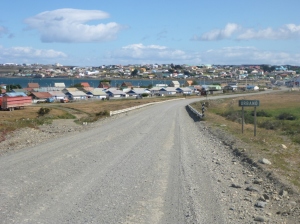 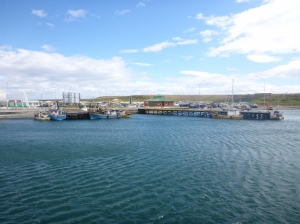 At the ferry office, a disgruntled employee told us that we may not get on, that there may not be space, that she didn’t have any record of our emails, and that we couldn’t buy tickets for another few hours. We were going to get on that ferry come hell or high water so we went with a divide and conquer tactic. Wolf parked the van up front so we would be the first car in and he scoped out the scene on the dock, while I parked myself at the ticket window and read a book while a line formed behind me. Finally ticket sales began, we secured our space, and loaded onto the waiting boat. 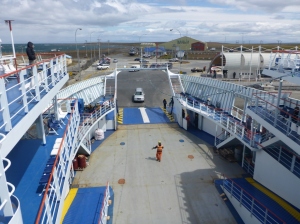 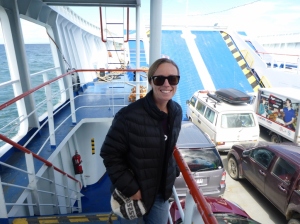 We’ve taken quite a few ferries on this trip and each one is different and interesting. From Porvenir to Punta Arenas, the trip was estimated to take 2.5 – 4 hours. To me, that seemed like a rather large range, but once we started out, I understood. Our ship was full of cars as well as trucks loaded with cargo, and once at sea, we were all rocking and rolling to points well beyond my comfort zone. Wolf checked on the van midway through to make sure our top-heavy vehicle hadn’t toppled over while we surfed up and down the big waves. 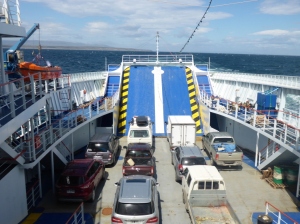 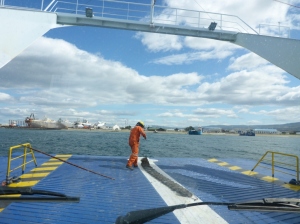 Arriving in Punta Arenas, we had hoped to leave our car and jump directly on another ferry which would take us on a trip out to a nearby island. Again, we had very little idea of timing, availability, or really any other details of the trip, but as soon as we were off, I ran into the ferry terminal and grabbed us a few seats on the next boat. We had just enough time to pack a backpack and lock the car before setting out again.

The boat took a couple of hours to reach Isla Magdalena, so we snacked and chatting about wedding plans while we watched the still-stormy seas. We finally reached the island and when everyone crowded off the ferry we were amazed to see thousands and thousands of penguins, stretching as far as the eye could see, but also waddling up to and all around their human visitors. 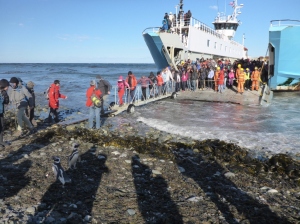 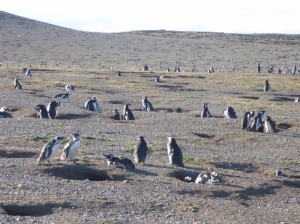 The island is a Monumento Natural and home to 60,000 breeding pairs of Magellanic Penguins. The whole scene was magical and completely surprising. 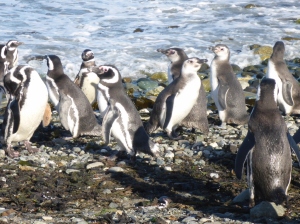 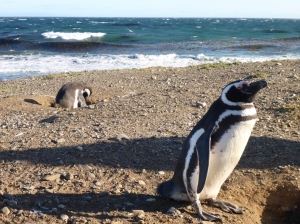 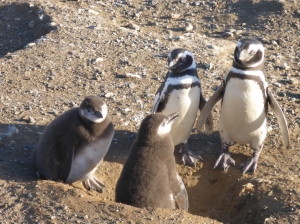 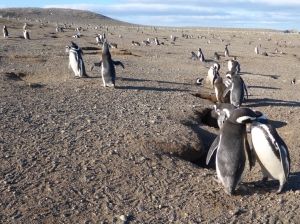 There were even baby penguins waddling around, and all the penguins seemed to be mating, and nesting, and playing, and fishing, all while seemingly unbothered by all the humans snapping photos. We spent a few hours walking among the penguins, marveling at how close they were and how cute they are. Standing right next to them, and hanging out at their home base was incredibly memorable. 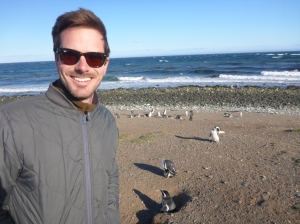 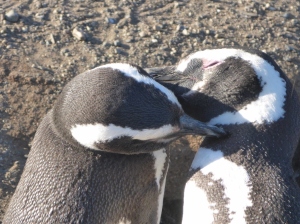 We were sad to leave but so happy to have seen so many adorable little penguin friends. I thought a lot about my Aunt Carol and how much she would have loved it. 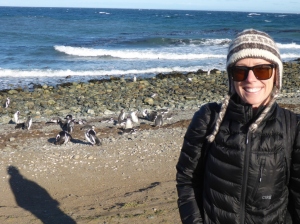 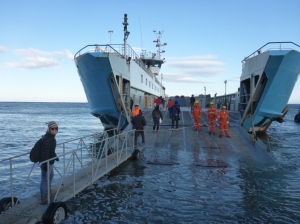 By the time the ferry docked in Punta Arenas it was around 11pm. We had no idea where we would stay or really where to start looking. Also, since we normally make a point of NOT driving at night, we were a bit on edge trying to find out way to the city to see what was available. Our first stop at a suggested location was a strike out as they were completely full. So we set off hoping to stumble across a camping option, but knowing that at this point we were better off in a hotel. I stopped into a couple of hostels to ask about availability, but with only single beds in bunk rooms left, the options were limited. Finally, Wolf asked one of the hostels if we could park out front and sleep in the van, but just use their showers and bathrooms. I don’t think the hostel manager knew quite what to make of us but he was fine with our proposal, so we set up camp on a street corner in the middle of downtown Punta Arenas. Our first urban camping experience. We tried to keep it as stealth as possible by keeping the top down and the lights low. And it was surprisingly easy.

We both slept great and surprisingly only felt the tiniest bit awkward about acting like homeless vagabonds, sleeping on a street corner. When we emerged from the van the next morning, the lady packing up her truck next to us gave us a slightly strange look, and then walked over carrying a box of camping supplies and asked if we were camping and cooking in our car. We weren’t quite sure how to answer, until she offered us the box full of food, camping stove fuel, and paper goods, and told us that she and her husband were just finishing their road trip through Chile and hoped we could use the supplies they didn’t want to take home with them. We got to chatting with the nice German couple and compared notes on where they’d been and how they had found the road and the parks and the trips in general. Eventually the hostel manager and his wife came out to admire our van and tell us about their road trip dreams. Once we had showered and cleaned up breakfast we tried to pay for using the facilities; he told us he wouldn’t even know what to charge us and wished us a good trip. We were incredibly thankful and headed out of town in good spirits.