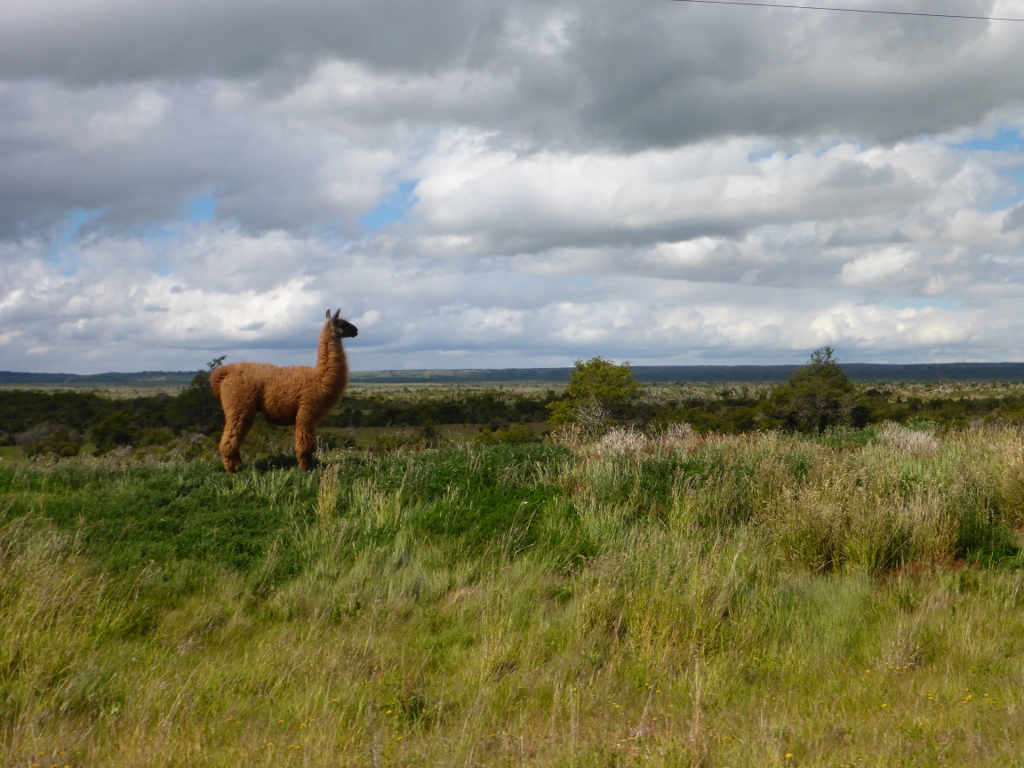 We thought we might stop at another penguins preserve before heading out of Punta Arenas, but once we realized it was a few dozen kilometers down a not-so-great dirt road, and since the rain had picked up quite a bit, we decided to pass on this one. It felt somewhat wrong to skip seeing more penguins but we had loved the prior day’s adventure so much that we were satisfied and didn’t want to push our luck with daylight, weather, and the car’s ability to handle another rough road.

The day brought with it another lovely drive. The rain stopped and we started seeing huge fields of purple and pink flowers on the side of the road, as well as a few new friends: 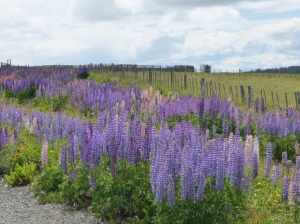 We drove until we reached Puerto Natales, and were welcomed into town by a beautiful view over Seno Ultima Esperanza.

We knew where we wanted to camp but had trouble finding it on our own, and eventually the tourist office pointed us in the direction of Josmar2, another fun little home-style camping option, complete with a resident cute kitty to pet. We pulled in alongside another huge rig and made ourselves at home.

We hadn’t quite flushed out our plans, as usual, but had arrived in Puerto Natales which would be our home-base for exploring the nearby Parque Nacional Torres del Paine. I had been eagerly anticipating our time at Torres del Paine as it’s been a place I’ve wanted to visit for years and years. Our plan was to do the famous “W” trek, a five-day backpacking trip through the highlights of the park. Arriving in Puerto Natales on Saturday night, we planned to start our backpacking trip first thing Tuesday morning, which meant we had two days to figure out how to do the trip, take care of loose ends, and make our way to the park. It felt so luxurious! After dinner, we even went for a walk on the waterfront, taking in a stunning sunset and spending time enjoying the beautiful (if a bit chilly) weather and exploring Puerto Natales. 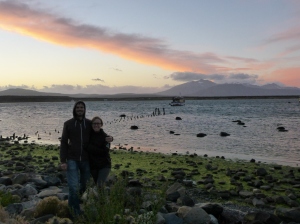 The next morning we were happy to receive an email from Lisa and Mike who we had run into on the hiking trail in Ushuaia. They were headed our direction and hoped we might be around to share a glass of wine. We were excited at the prospect of hanging out with a few new friends later that evening. We tidied up and dropped off a load of laundry, perhaps equally excited at the prospect of clean clothes and sheets.

Our main goal for the day was to check out the 3-o’clock talk put on by the folks at the Erratic Rock, a local hostel and outfitter that gives a daily talk with tips and advice about backpacking in Torres del Paine; since it had been recommended to us by basically every traveler we had spoken to, we decided to check it out.

The talk turned out to be a  huge help. Some of the info probably should be common sense, but I’m not sure that we would have been quite as happy with our experience without taking advantage of a few of their suggestions. After the talk we walked around Puerto Natales shopping for the standard camping menu – pasta, oatmeal, and our precious peanut butter and jelly. Every time I see peanut butter here, I buy at least 3 jars. After the third store we finally found some in Puerto Natales – it seemed to be a hot commodity because when we went back to the same place a few days later the shelves of peanut butter were bare. We also found lots and lots of Quinoa :)

Back at the campsite our friends Lisa and Mike had arrived and set up camp. Another couple driving a Volkswagen had told us that the campsite where we were staying had let them park their van for free inside the locked gate as long as the couple agreed to purchase their bus tickets into the park from the camping management. We were excited about the idea of saving our car from another day of driving dirt roads into the park and the concept of leaving it parked under relatively secure conditions for a few days was even more exciting. Plus, if we purchased our tickets there, Don Pepe, the manager, would personally drive us to the bus station. We were sold.  Just to be personally chauffeured by Don Pepe was reason enough. Lisa and Mike were in the same boat and we were excited to purchase bus tickets together and planned to start our hike the same day.

The next day was one more day of rest before heading into the park. We caught up on internet things and emails, grabbed a few last-minute supplies, pulled out all the camping gear from the attic (also known as our rooftop storage) and jammed our backpacks full of everything we would need for the next 5 days. For me, this meant extra clothes I probably didn’t need; for Wolf this meant carrying all our food, tent and other communal supplies. Win-win!

Just before bedtime the evening before we left, Don Pepe realized with all this vans parked at his campground, he may not have room for more paying customers while we were gone, so at the last-minute he told us we’d have to either pay for the days we would be gone or move our cars in the morning. We were thrown off by the change but also not looking forward to figuring out a new plan before our 7:30am bus the next morning. In the end, Don Pepe won because we were too tired to deal with the last-minute switch and we enjoyed sleeping in the relative warmth of our van one more time before starting out the next morning.